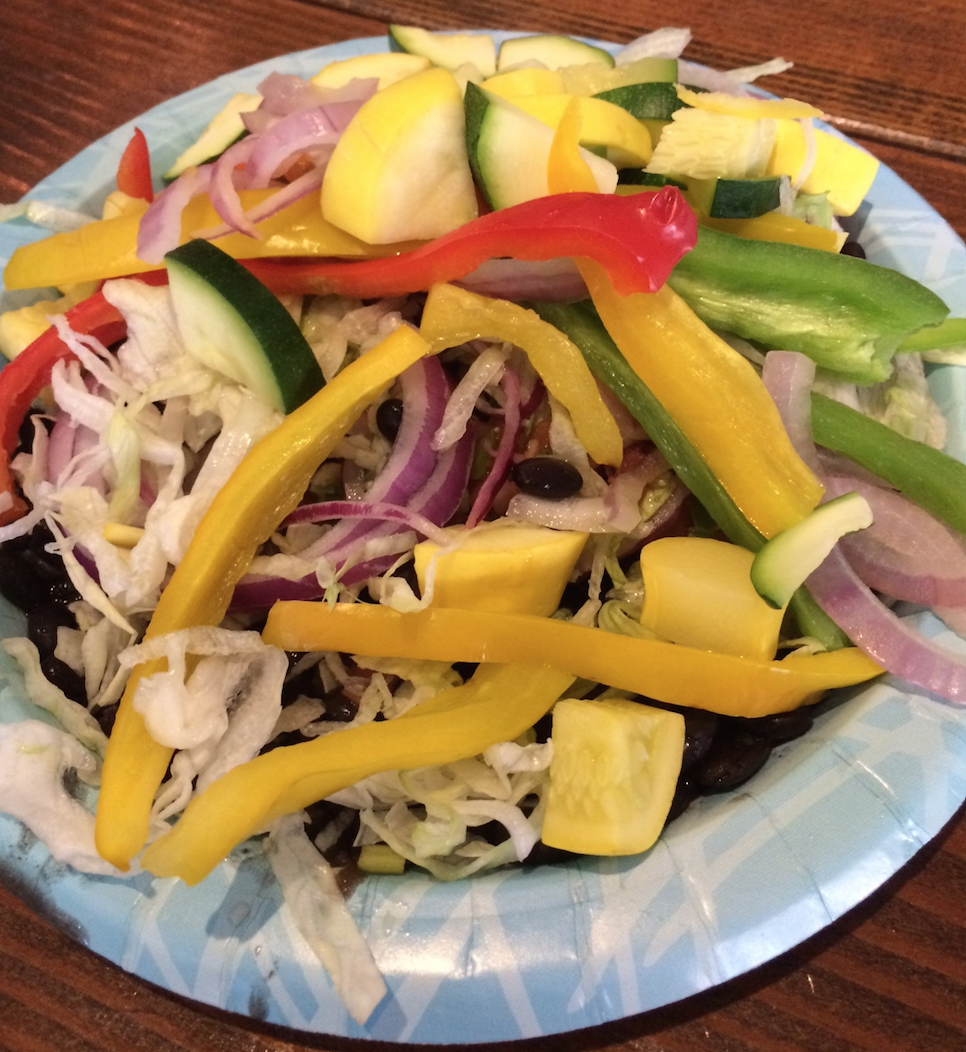 Me: Hi there, I’d like a veggie burrito please. But I don’t wan’t the rice, cheese, tortilla or
guacamole.

Server: So you basically want beans and veggies?

This scenario pretty much sums up my month.

Yes, I had the brilliant idea to go on a very strict diet because I wanted to understand how my body responded to different kinds of food. I went all in and read 12 books on nutrition, kept a meticulous food journal, tracked symptoms, got a full blood panel and food sensitivity test.

The first half of the month was a swimming success. I stayed at home and planned, shopped and prepared each meal. There were no struggles, no cravings, no complaints.

The back half of the month, however, was a disaster. My busy social calendar had me at restaurants, cafes and parties where 90% of the food choices contained something off limits. On top of that, my food sensitivity test had me yank out even more staples form my diet. Like eggs. And avocado.

I found myself on numerous occasions staring at a plate of [insert forbidden food here] while munching on raw red peppers which does not make for good company. It sucked.

But a lot of great things did come out of this month: For starters, I feel good. I’m stronger, more energetic and my allergies have all but disappeared (which I later attributed to dairy consumption). And while I have a long way to go to find my personal “food code”, one that accommodates my wacky thyroid issues which has been giving me problems for the last 6 months, I’m moving in the right direction. My family is embracing these healthy concoctions and my husband even lost 10 pounds, which he promptly celebrated with a couple of beers and a cheeseburger. Overall, it’s been an eye opening experience that has changed my entire concept of food.

But there’s one thing I learned this month that caught me off guard: It’s how sensitive the subject  is.

The Power of Food

I know that 27% of Americans are obese. Almost 70% of Americans take at least one prescription medication. Childhood obesity has doubled over the last 30 years, with 18% of our kids ages 6-11 being classified as obese. We’re getting fatter and sicker and it’s pretty much universally agreed upon that our sugar fueled high carbohydrate diet is a common culprit to many of our chronic illnesses.

I know that 27% of Americans are obese. Almost 70% of us take at least one prescription medication. Childhood obesity has doubled over the last 30 years, with 18% of our kids ages 6–11 being classified as obese. We’re getting fatter and sicker and it’s pretty much universally agreed upon that our sugar fueled high carbohydrate diet is a common culprit to many of our chronic illnesses.

I can’t think of a single person that I know personally over the age of 65 who doesn’t have some sort of nagging ailment. Bad knees, joint pain, high cholesterol, migraines, weight gain, cancer, dementia, diabetes, heart disease. They can’t do the things they used to do. Getting old sucks, they tell me.

That’s a little scary, don’t you think? I’d like to think that I’ll spend my golden years traveling to exotic locales, playing tennis at the club and taking my grandkids to DisneyWorld. Maybe I’m delusional, but if there are things within my control (and I am well aware that there are things far beyond it) that I can do today, by all means sign me up.

I get embarrassed at restaurants or at parties when I don’t drink and skip the bread and cheese and dessert. I hate that I have to nitpick about every ingredient in my entree.

Sometimes I’ll share nutrition articles and pictures of my sugar free baking endeavors on social media (#glutenfree # sugar free #healthyliving #nourish #eatclean) because I get excited about this stuff. But I know that some find it annoying because people have a particular disdain for those who talk too much about their diets and workouts, where as pictures of baked goods and sweet treats do spectacularly well.

I don’t want to be that irritating person on Facebook who thinks she’s got it all figured out because I don’t. And I know I shouldn’t care so much about what other people think, but sometimes, you can’t help it.

The point is, I know that my food choices aren’t crazy. They’re just not normal. The grains, the fast food, the snacks, the sugary drinks – the stuff that’s around us every day at the grocery store, at restaurants, at schools and at parties — that’s the normal.

Normal is the bagel Fridays at the office. Monday night beer and wings. The 4pm bag of potato chips.

I get that we’re all plenty smart and can make our own decisions. We don’t need people shoving their inspirational quotes and workouts of the day and sugar free dinners down our throats every day.

But I do hope that we can enjoy listening to other peoples’ philosophies and struggles with food and wellness. That we can support our friends who take on new personal challenges and enjoy their positive transformations.

I hope that, for those of us who can afford it, we can be curious enough to understand and experiment on how food impacts our own bodies – if not for our own sake, then for that of our kids. Because if we can start them off early with the right habits, it won’t be such a struggle to avoid the bad stuff later on. And as we all know, it’s a hell of a struggle.

But most of all, I hope that we can all start to request and demand better food options at restaurants, at stores, at workplaces and at schools, because the more we talk, the more they will listen. Things just might change. And then it will become… the new normal.

Next month I’m taking on something we all struggle with – digital clutter. I’ll be spending the month of June learning how to manage our crazy digital lives. So if you’re curious to see how it goes, join the email list below!