The question is, what is this technology doing to us? What is it doing to our kids?

What am I even talking about?

I’m talking about the low-level exposure to microwave radiation emitted from the mobile and other wireless devices we use so frequently.

This is my topic for the month: electromagnetic forces, EMF for short.

It’s a controversial subject, especially because there’s so much conflicting evidence about how it affects the body. Does it cause certain types of cancer? Reduce brain size? Does it impact the growth and development of our kids because of their thinner skulls and growing brains? How does it affect fertility and pregnancy, if at all?

WHAT THE EXPERTS ARE SAYING

Nobody knows for sure and there is no definitive evidence to suggest that this type of radiation is harmful. My pediatrician does not appear to be concerned with the radiation component as it applies to my kids and their devices (too much screen time, on the other hand, is a big no-no).

But these devices have only been around for a few decades with widespread adoption happening only in the last 15-20 years, so who knows what 20, 30 or 40 years of exposure will do to our bodies and our brains.

And there are a number of compelling theories and studies, from Chernobyl and Fukishima to experiments with animals that do link radiation exposure to health problems.

Something about this whole thing doesn’t sit well with me. Maybe it’s because I’m a huge fan of technology and a frequent early adapter of all things shiny and new. And because I’m addicted to my iPhone and my wireless connection, and have no intention of giving it up. And because I have two kids under the age of five who are digital girls living in a digital world.

THE STORY OF THE FROG IN THE POT OF BOILING WATER

I keep thinking about the parable of the frog and the boiling water where, if you drop a frog in a pot of boiling water, it will jump out immediately. But if you drop it in a pot of room temperature water and slowly bring it to a boil, the frog will remain in the water until it dies. The change in temperature is so slow that the frog does not realize that it is boiling to death until, of course, it’s too late. 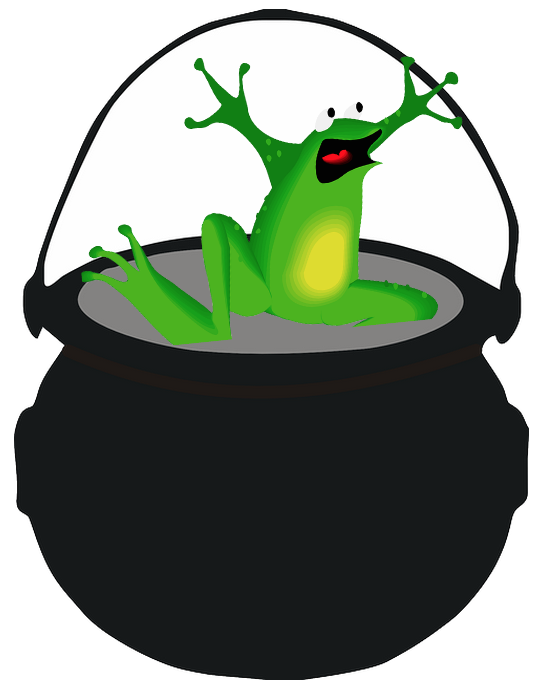 While this story is scientifically false, the metaphor is one worth noting. It’s the idea that we will immediately react to a sudden or obvious threat, but will ignore slow and gradual changes. We are all frogs in pots of hot water when it comes to some aspects of our lives (I, for one, will wait until the water is positively scalding until I pay a visit to the dentist), but perhaps we should all, if nothing else, be a little more aware of the things in our environments that are affecting us.

And so, I can only wonder: even if we don’t have the evidence or the answers, should we, as adults and parents, be taking precautionary measures to protect ourselves and our children from overexposure to wireless technology?

I’m confident that scientists can work out a way for us to coexist with these new technologies in a non-harmful way. If they can put a man on the moon, they can surely figure this out – right?

They just need a compelling reason to find a solution.

Until then, I think I’m just going to let my phone spend a little more time in airplane mode.