e·mo·tion, noun, a state of feeling.

It comes from the Latin word movēre which means to move.

I’ve thought a lot about the relationship between the physical and mental this month. I’m fascinated by the idea that training our bodies physically has such a profound effect on our mental capabilities. And equally intrigued by the idea that sometimes, all it takes to feel better is simply to move the body. Sit up straight. Smile. Jump up and down. Get in the shower. Go for a walk. Work out. Breathe.

Not for the sake of burning a few extra calories or getting a little more exercise, but to incorporate more movement into my day. To force myself out of the habit of sitting for extended periods of time and spend more time outdoors.

And to see, if at all, how it impacts my mood, my thinking and my work.

Why 10,000? It’s a decades old recommendation that came about initially as a way to sell pedometers. It’s the equivalent of 5 miles of walking, and it’s more or less twice what the average person walks each day. Today, the American Heart Association, the World Health Organization and the Fitbits of the world use 10,000 steps as a baseline for what we should aim to get each day.

WE NEED TO MOVE MORE

It makes sense. We should all be moving more.

Just look at any elementary school classroom and watch kids getting antsy and squirming in their seats after ten or fifteen minutes. They can’t sit still.

They can’t sit still because they’re not supposed to sit still. The human body is not built to be idle. Evidence suggests that the evolution of human beings favored constant movement in the form of running slow, long distances (so that we could outlast our much stronger and faster prey). 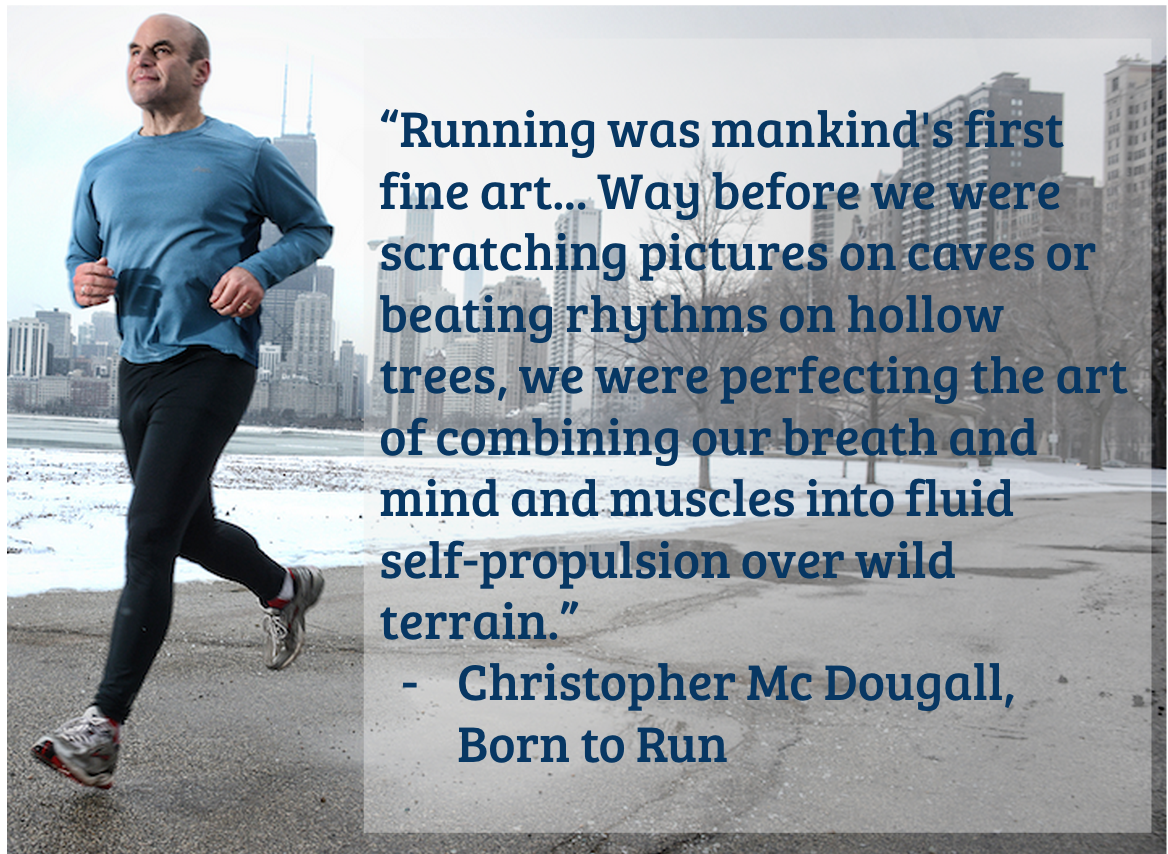 Extended periods of idleness change the way our body stores energy, burns calories and processes information, resulting in some serious health consequences down the road, as I’m sure you’ve heard from such recent popular news stories as “Sitting is the new smoking” or “Sitting will kill you” that report our increasing inactivity (coupled with poor diet) is resulting in skyrocketing obesity rates as well as a host of cardiovascular and chronic illnesses.

Christopher McDougall, author of Born to Run, sums it up nicely: “Deny your nature, and it will erupt in some other, uglier way.”

WALK FOR HEALTH, SANITY AND CLARITY

Sometimes, the best solution is the simplest. Just get up and walk around throughout the day.

Walk so you can enjoy the outdoors. Because it only takes a few minutes of breathing fresh air and feeling the sun on your face to feel the restorative effects of being outside. 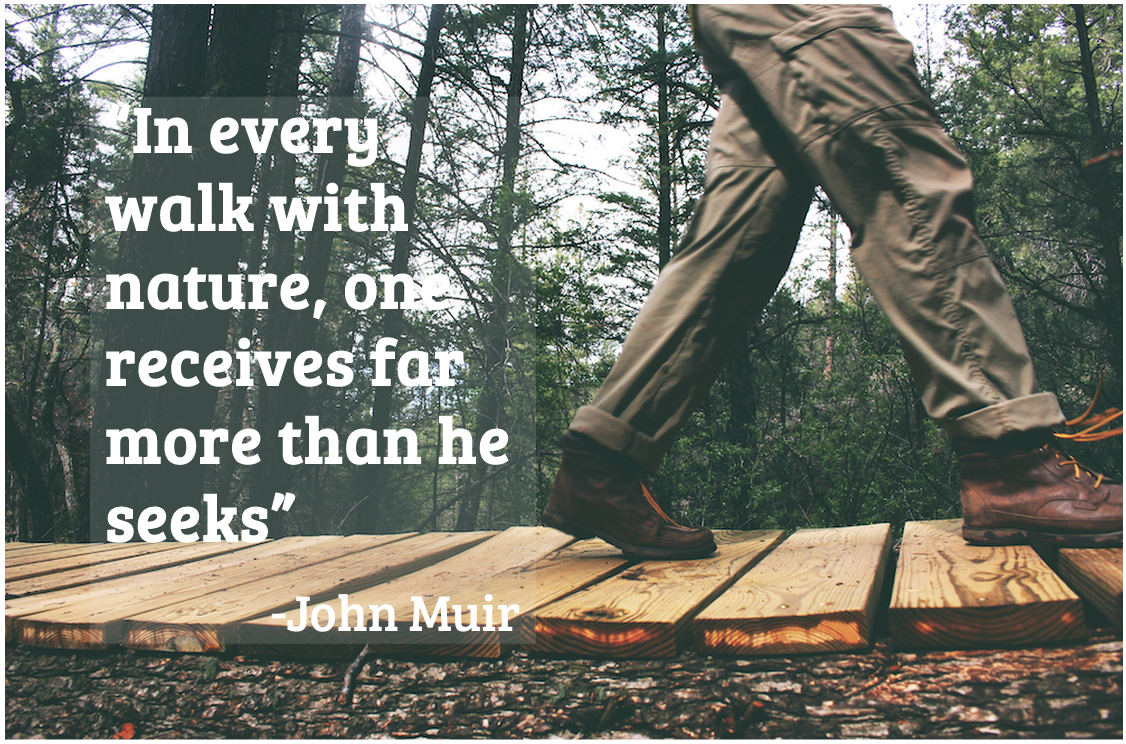 Walk and burn the calories. And be happy knowing you’re enhancing your cardiovascular and brain health.

Walk and talk. Ditch the conference room or coffee catchup. You’re less likely to get distracted by your phones and computers, and more likely to have a more focused and productive conversation.

Walk and learn something new with an audiobook or a podcast. You’ll be surprised at how much you can gain from even 20 minutes a day of “mobile education”, and it just so happens that movement while learning improves information retention.

Walk if you’re feeling emotionally stuck, down or uninspired. When we walk, our hearts beat faster, more oxygen and blood is circulating, not just to our organs but to our brains, promoting new connections between brain cells. And because walking is such a simple exercise that doesn’t require much exertion or focus, we can turn our attention to coming up with more creative and inspired thoughts. 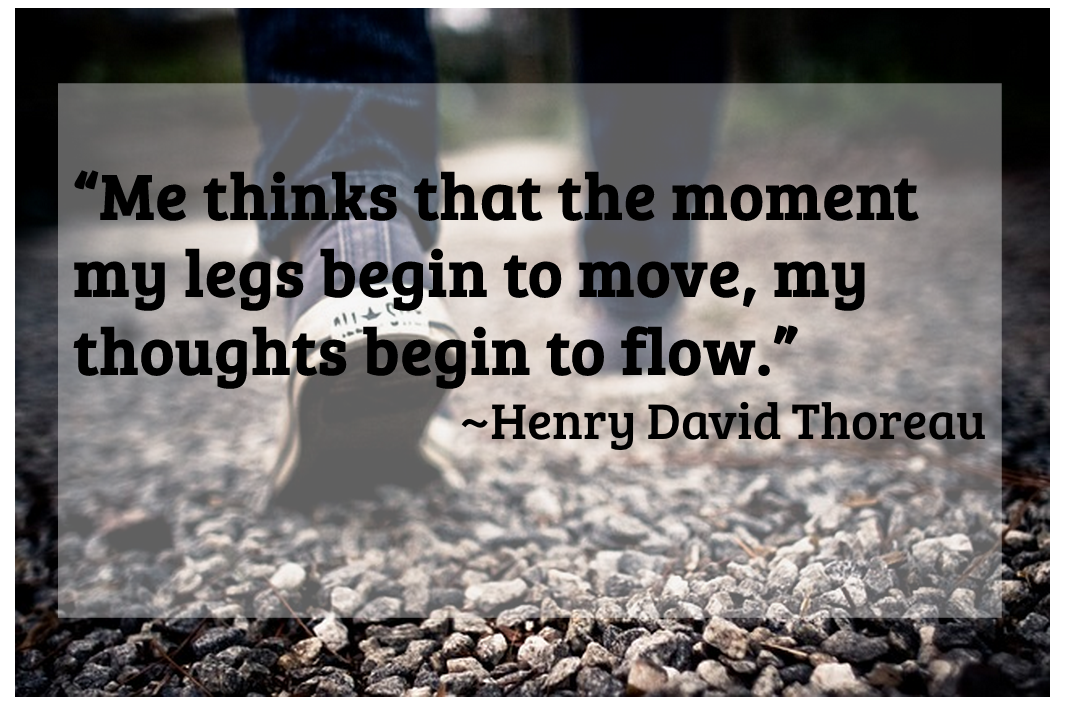 And walk because the act of walking lifts the spirits. 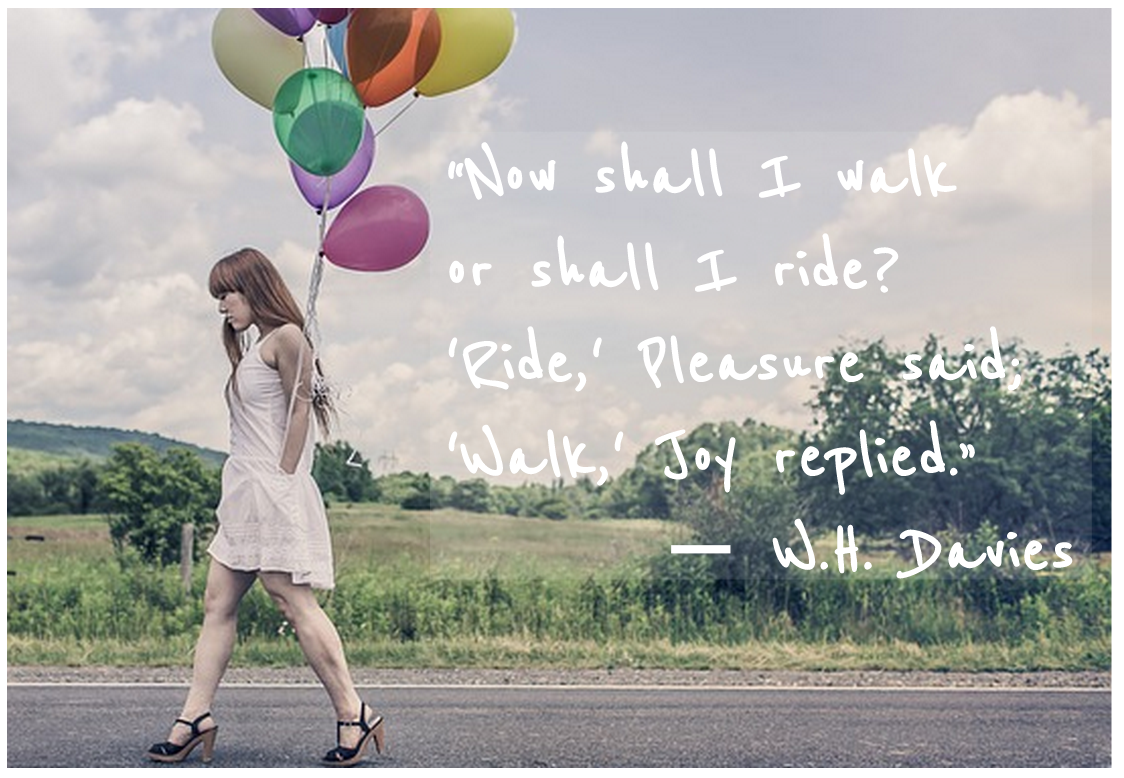 I had never thought about the notion that perpetual motion is a primal instinct. The idea that if we don’t move, physically and metaphorically, we feel less alive. There’s less meaning, less purpose and less energy.

And if that’s the case, then maybe we should take a step back, start with the basics and do what our hunter gatherer bodies are made to do: move the body. Walk, run, dance, jump, skip, and skate, and build from there. Get used to the idea of moving so that we can slowly move forward and upward and toward whatever it is we aspire to do in our lives… which, more often than not, is simply to get to a better state of feeling.