An accomplished marketer and entrepreneur who was an early employee of both Mint.com and Facebook, you’d think he had some fancy high tech tricks up his sleeve.

He hustled his way through those 24 hours using surprisingly simple tactics.

First, he got two important things out of the way:

1. A way to get paid: he came up with a name, bought a domain, and put together this somewhat sad looking website with a Paypal link all in about 20 minutes.

2. An audience to market to: he informally polled friends and coworkers to understand why and where people bought beef jerky (How often do you eat jerky? What would make you pay for jerky right now?), eventually coming to the conclusion that his most viable target market was young professionals and offices who liked healthy snacks.

Now the real work began – the process of exhausting his personal network through individual emails, instant messages, texts and social media posts. Anyone who showed interest received not just an immediate follow up, but also a pre-written template to forward to their networks. Pretty clever huh? 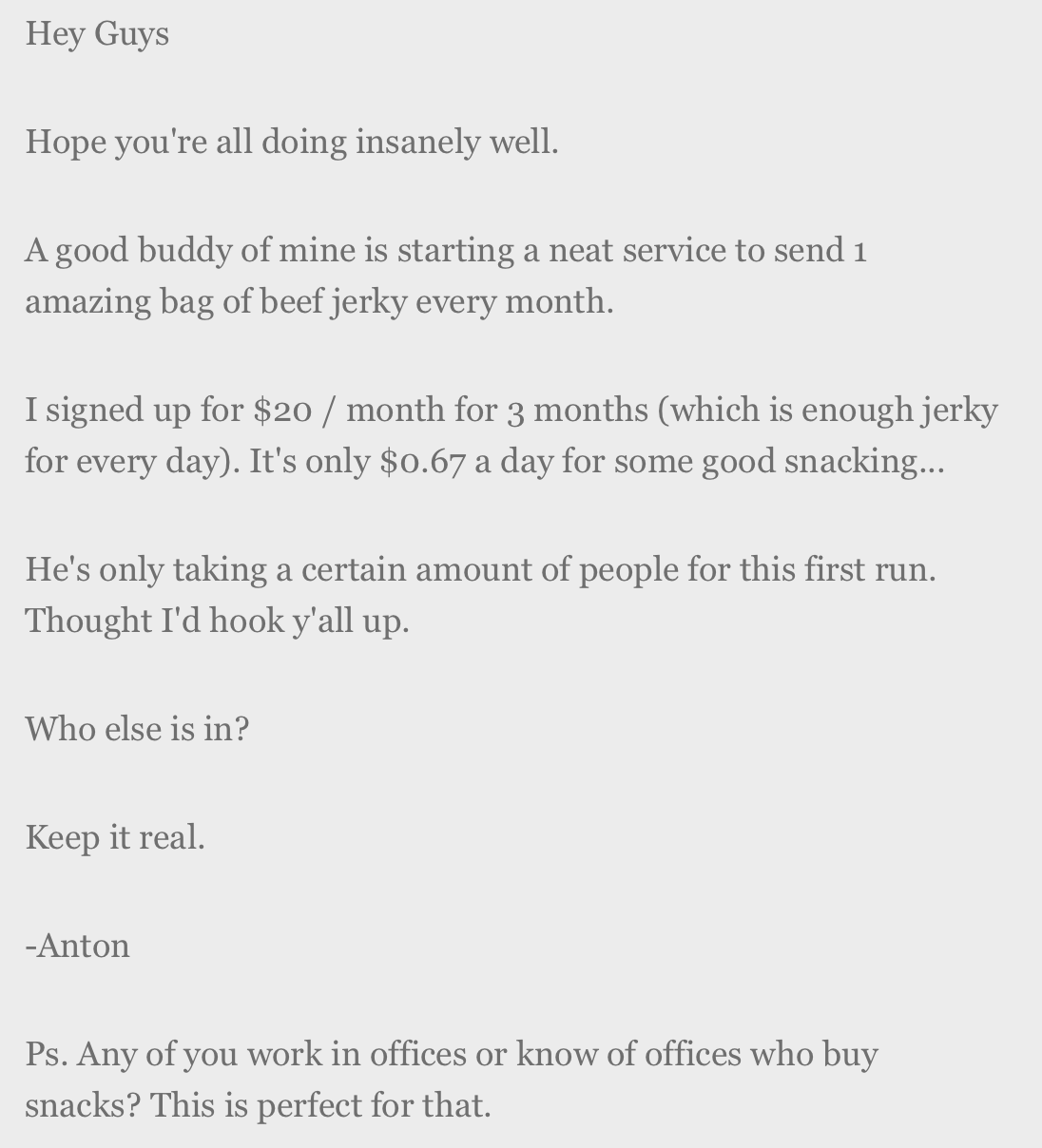 So how did he net out?

9 hours later after barely eating, 4 large amounts of caffeine and working harder than I have in a long time … here’s what I ended up with:$3,030 in total revenue / $1,135 in profit (BOOYAH BABY!)

Oh, and the site, SumoJerky.com is still running today. It’s an actual business. You can read the full story here.

Jeff Goins took a different approach to his “48 hours build a business” challenge. His goal was to learn how to roast coffee beans and sell a bag online in a single weekend. To do this, he:

Then, just like Noah did, he started manually reaching out to his network, adding any interested parties to his email list. He also launched a “Win a Year’s Supply of Coffee” contest (with donated beans, of course).

By the end of the exercise, over 70 people had signed up for his email list, a good enough number to make his sales pitch. 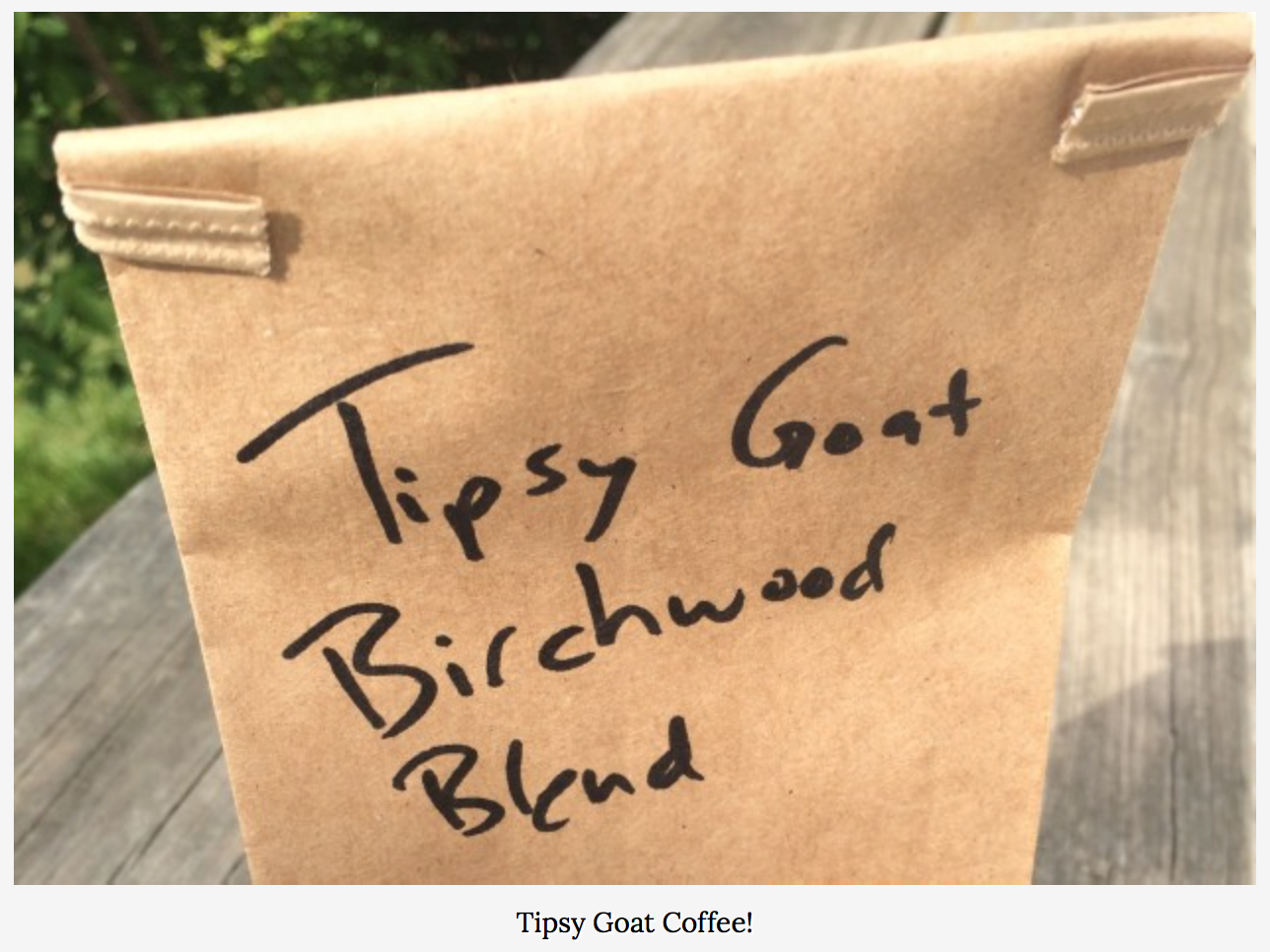 I sent an email to my list, telling people about the new blog and what I hoped to do with it and told them if they wanted to support me, they could buy a bag of coffee. And here’s the crazy part: one of them actually did.

You can read Jeff’s story here.

And as for me and my earn $1000 in a month from the wedding blog challenge?

I’m not going to rehash the trail of insecurity that followed me around this month or the series of tactical errors and incorrect assumptions I made.

My fatal flaw happened before the month even began and it was the fact that the goal and the product didn’t align.

I set a goal of earning $1000 in 30 days, but then I went and chose a very low cost, low converting product to sell (ebooks), justifying the decision because of its potential to generate a steady stream of long term passive income.

$1000 in a month vs. passive income? Those are two VERY different things.

It’s no wonder my days turned into a series of unfocused and hastily put together projects. Looking back, I should have started with a different question: Why am I doing this?

There’s a very helpful tool in understanding the cause and effect relationship of a challenge or a problem called the Five Why’s that I very recently came across. It works by asking a series of Why’s until you’ve arrived at the root of the problem.

Issue: I want to earn $1000 in a month from my wedding website, Idojour

Had I done this simple exercise, I would have realized that it’s not so much about earning $1000 from Idojour as it is finding a way to monetize an existing platform through creative content.

I would have revised my goal to launch and sell my first digital product, and then focused my time and energy on completing, publishing and marketing the heck out of that book, which is what I’m doing now.

Not all is lost, though, because I learned and accomplished quite a bit this month:

And let’s not forget the very valuable crash course in vulnerability and rejection I received.

How to Start a Business

For those of you who were hoping to see me earn $1000 in a month, fear not, I’ve already scheduled a do-over for later on this year and it won’t have anything to do with weddings.

I want to give it another go because I genuinely believe that a challenge like this isn’t impossible. So many of us convince ourselves that it’s beyond our reach and that we need a certain amount of money, time, expertise and guts, but that’s not necessarily the case.

What you do need, as I’ve come to learn, is:

1. A clear goal: Is it to make $1000? Get one sale? Whatever it is, your goal should be specific and optimistic, but reasonable, so that you can work backwards and break down what needs to happen to get there. Take a few minutes to get clear on:

2. A product to sell: This is the part that trips people up the most because so few of us know which avenue to pursue. So let’s simplify the options and see what looks attractive and reasonable:

Now ask yourself: What are you good at? What do people ask for your advice on? What kinds of books or magazines do you enjoy reading? Hone in on what your strengths, skills and interests are and find the best intersection between them, and then check to see that they align with your goal.

3. A way to validate your idea: Make sure that it’s something that has potential to make money. Find a few people that you think would be interested in your idea and pick their brain.

You can create surveys, informal polls, read book reviews on Amazon on topics in your niche – do whatever helps you understand your potential customers. More importantly, listen to what they have to say. Write down their exact words and use this feedback to revise, rethink, and refine your idea.

3. A way to market and sell it: Because you need a way for people to find you and pay you:

And if you want to get even fancier…

4. A willingness to leverage the resources you already have. We all have networks – family, friends, connections on Facebook or LinkedIn, old coworkers and random contacts that have networks of their own. Asking is hard (and uncomfortable and painful) but the first and most cost effective step in launching a business is engaging in activities that do not scale. Like reaching out to people, picking up the phone, and sending emails, messages and text, one by one.

5. A heck of a lot of work & persistence: The only guaranteed thing in business is that sooner or later, the enthusiasm will fade, the rejections will pour in, and everything that’s going poorly (and there will be many) will make you doubt the whole endeavor. 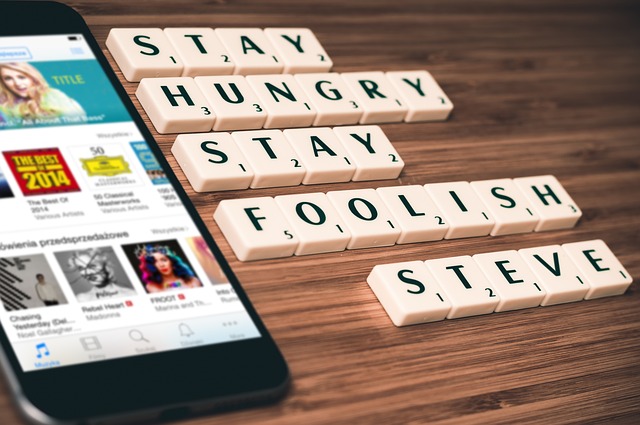 Entrepreneurship requires a tremendous amount of discipline, focus, endurance, thick skin and perhaps, to take a page from Steve Jobs, a little foolishness. Incidentally, they’re all traits that I don’t inherently possess, which is exactly why I embark on these random challenges every month. I wrote a novel to build discipline, learned to sew to improve focus, held a 15 minute plank for endurance, and I attempted this “foolish” challenge to thicken my skin (and make some money, of course). This is my education.

The month is over, but the Idojour project isn’t. There’s more work to be done, books to publish and sell, and giveaways to complete. Progress will happen at a slower pace, but it will happen.

And I’ll be keeping you posted.