That’s the number of devices I have in my home. From my juicer, wine fridge and microwave oven, to my collection of Apple products, to my hair dryer, there are 54 items that plug into something.

We are a high-wattage family.

Power lines hug the side of my street. There are two large cell phone towers atop my apartment building. Two blocks away, there’s a box on the sidewalk that says “underground cable, do not touch”.

This is where I live. Electricity up, down and all around. Seven days a week, 24 hours a day.

Electromagnetic Forces (EMF) – What Do I Need to Know?

The science of radiation is really really complicated.

Different radioisotopes emit different radiations. Some decays release gamma rays, which can travel a great distance from the atomic nucleus that released them.

I’m reading books like “Radiation”,  “Zapped” and “The Body Electric” and am sorting through articles and studies on all things electricity. As I work my way through wavelengths, frequencies, hertz and sieverts, my struggle to understand how a dose of EMF affects how our bodies respond only grows.

It is, quite literally, a maze.

If you want to skip to the good part – the “what can I do to minimize EMF exposure” part, click here. But, if you want to learn a little bit more about what this EMF business is all about about and what to be aware of, please read on.

There are two types of radiation:

Within these two types of radiation are various units and measurements from different sources that interact with trillions of cells in our bodies in all kinds of ways and given it’s complex nature, there is A LOT of controversy regarding if and how radiation from our environment impacts our health.

It’s kind of a cluster-fuck.

Allow me to briefly outline the conflicting theories: 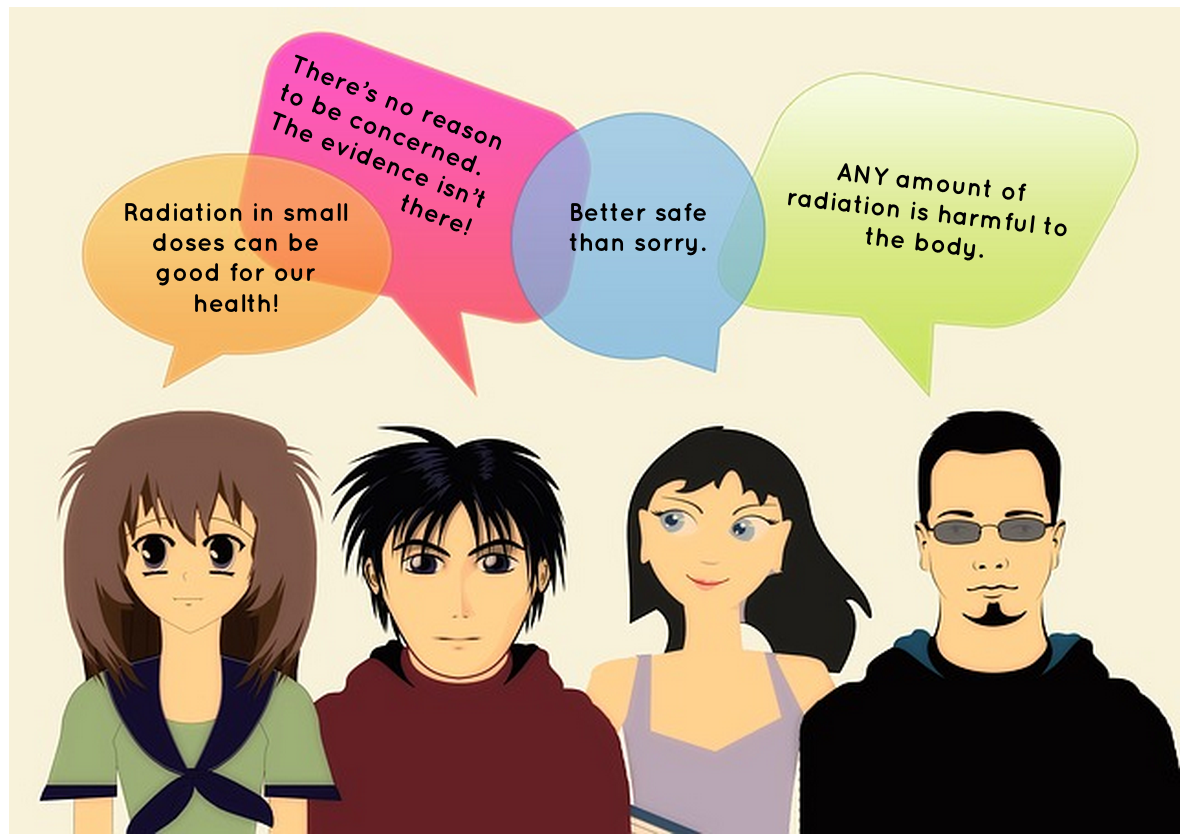 1. Radiation is good for us! Ok, this one is kind of interesting. Its this idea of “radiation hormesis“, where very low doses of ionizing radiation can be beneficial (as in protects us from cancer beneficial) in the same way that a little bit of stress like sunlight, cold water plunges, or fasting produces favorable health responses. Do it in larger doses, however, and, well, you’ll get sunburned, hypothermia and starve.

2. There is no reason to be concerned. This group of people argues that the hype is unwarranted because the evidence simply isn’t there.

3. Better safe than sorry. Apple says it on their warning labels (albeit in very fine print) – don’t place your device directly on your skin.

The International Agency for Research on Cancer and the American Cancer Society classify cell phone use as “possibly carcinogenic to humans”.

4. Any form of EMF exposure can be harmful! And finally, there are those who passionately crusade against the dangers of electronic pollution even at the lowest of doses, advocating for the promotion of awareness, education and further research.

Hundreds of studies have found that exposure to magnetic fields (EMFs) may be associated with a variety of conditions, including Alzheimers disease, ALS, heart disease, miscarriage, birth defects, infertility and mood disturbances such as depression. – Ann Louise Gittleman, Zapped

Each of these groups have their treasure trove of scientific/epidemiological/peer reviewed studies to support their claims, making it a bit of a challenge for us regular folk to draw any conclusions.

Let’s look at the studies, then. I’ve got lots of them I could tell you about. And stories. Scary ones.

Like the story of Catherine Kleiber the newlywed who, shortly after moving to a farm with her husband, would become so tired she couldn’t walk up a flight of stairs. It turns out her new house sat on top of a current of dirty electricity and to this day she continues to be plagued with all sorts of ailments from this extreme electro-sensitivity.

I could tell you about the study on the wildlife in Chernobyl and Fukushima that found increased rates of genetic damage, deformities, abnormalities and reduced rates of fertility, population size and lifespans.

Or that there is a strong correlation between long term cell pone use and an increased likelihood of brain cancer (18%), and that the location of these brain tumors align with the side of the head where the user held his phone.

The same goes for breast cancer and women storing their phones in their bras, like 21 year old Tiffany Franz who found a cancerous lump in her breast after having stored her cel phone in her bra for five years.

There are lots of truly compelling studies on worms, mice and rabbits and rats being exposed to various wireless signals. Their brains look different. Their nervous systems don’t work as well. Sperm counts are lower. Learning is impacted. You get the picture.

But I suppose I could also tell you about a 31 year old woman from New Zealand who died from drinking two gallons of Diet Coke every day. And a little boy from California named Ryan who developed Autism Spectrum Disorder following a series of standard vaccinations.

I can cite studies and tell you scary stories all day about something in our environment that resulted in some terrible illness. But, even if the correlation is strong, it doesn’t necessarily imply that the causation is there. And we cannot assume that these correlations apply to the general population.

And this is why the EMF debate remains so muddled. Because causation has not been proven.

The research continues to progress, but the media and the government are not making the issue much of a priority.

To help illustrate why, let’s look at brain cancer. The horrific cancer that we are at an increased risk of developing over a lifetime of constant radiation exposure. According to Scientific American, the chances of developing a brain tumor are 1 in 29,000 for men and 1 in 38,000 for women worldwide.

Not to diminish the horror of brain cancer because it is a very real and very serious thing, but it’s just not enough of an epidemic and there’s not enough concrete evidence to warrant greater attention. Side note: perhaps the anti-wireless crusaders should consider their own version of the ice bucket challenge?

So where does this leave us?

For me, with a fact that I think everyone can agree on:

Cell phones and other electronic and wireless devices do emit an electromagnetic field and they do penetrate the head. 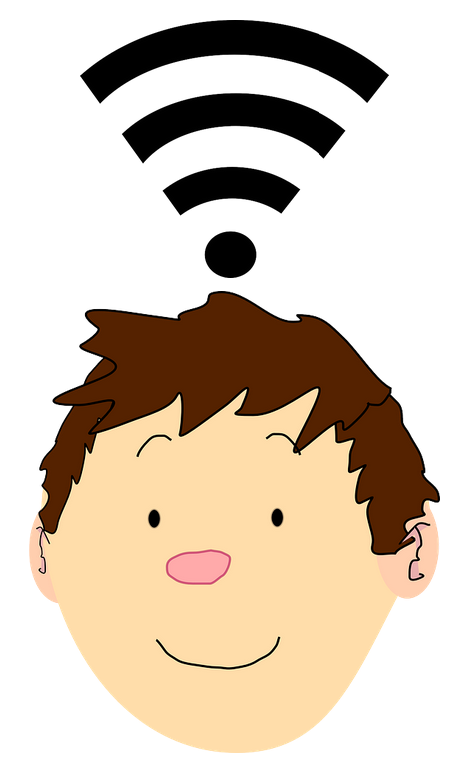 We just don’t know with 100% certainty how it impacts our brains and our bodies.

There are, however, two areas in particular worth taking note over:

Little kids have thinner skulls that absorb radiation in higher doses and penetrate more deeply into their brains.

Children are still developing, they have rapid cellular replication and growth rates that make them especially vulnerable to DNA damage. They also have a longer lifetime exposure to this new pervasive radiation than any previous generation.  – Devra Davis, Disconnect

This is hotly debated topic, especially since, according to Consumer Reports, 60% of 8-12 year olds have a cell phone (and spend over 3 hours a day on it). Add to that the popularity of wireless baby monitors, noise machines and educational technology. Not surprisingly, teachers, parents and experts alike are fighting against children being exposed to wifi and mobile devices at home and in classrooms.

Because, they argue, if there is a small chance that this kind of exposure will have a negative impact on their fragile, growing brains, bones and developing nervous systems – and not just that, but an increased likelihood of developing hyperactivity or attention disorders, then it is our responsibility to protect our children in the same way we force them to wear helmets and kneepads and sit in carseats with three-point harness systems.

Fertility rates are declining. Cel phone usage is skyrocketing. Correlation without causation, I know, but there is some interesting research that connects reduced male fertility as a result of EMF exposure, specifically linking lower sperm counts and testosterone levels with men who carry their cell phones in their pockets. Tim Ferriss wrote about it in his book, Four Hour Body, going so far as to test his own sperm count with and without carrying a cell phone in his pocket.

There is a direct relationship between duration of cell phone use and sperm count decline. Sperm count is reduced by half in men who carry cell phones in their pants pockets for four hours per day. The motility of the sperm is also impaired. The testicular barrier, that protects sperm, is the most sensitive of tissues in the body, and is 100x more absorbent. Besides sperm count and function, the mitochondrial DNA of sperm are damaged 3x more if exposed to cell phone radiation. – Dr. Mercola

Ok, now this is substantial. If nothing else, it’s reason enough to make me want to think twice about our devices touching our bodies for extended periods of time. For all of us, and especially for kids and pregnant women.

I covered a lot, but by no means everything.

My conclusion is this: I’m not about to throw my microwave out the window. I won’t be unplugging my wireless router and confiscating my kids’ iPads either. Heck, I might even buy the Apple Watch when it comes out.

But there are absolutely some things – simple things – that I will do to minimize EMF exposure.

Put phone on airplane mode at night. Use a headset. Don’t stand next to the microwave when it’s on. And be extra vigilant with kids and devices.

There are a lot more specifics, of course, so for those of you who want some more tips on how to minimize EMF exposure from cell phones and laptops, click here.